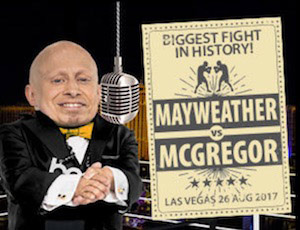 The interest in Mayweather vs McGregor is huge and tickets are sold extremely fast. Instead of paying more money for a resale ticket you might try your chances first with the Battle of the Bosses. This is an extraordinary opportunity to get some experience and win some of the only Mayweather vs McGregory tickets left. Players who wager £50 on Battle of the Bosses between Thursday 27th July and Sunday 13th August 2017, will have the chance to win a ticket into this spectacular prize draw. With more money you wager you increase your opportunities to collect entries to see Mayweather vs McGregory on Saturday 26th August.

This is the boxing match of the titans and even you are not a boxing fan it’s worth seeing it to enjoy a touch of class coupled with the excitement of professional boxing in the Sin City of the USA.

WHAT DOES THE MAYWEATHER VS MCGREGOR PRIZE PACKAGE INCLUDE?

If you win, you will receive TWO TICKETS to the fight at the T-Mobile Arena, return flights, some cash to spend and a 4-night stay at the beautiful five-star Wynn Hotel. It’s amazing, isn’t it? So you will have the chance to watch Mayweather vs McGregor in Las Vegas by winning this luxury trip.

What other prizes are offered by Battle of the Bosses?

There’s everything to play for and lot’s that eager online games players can get their lucky hands on. Over £7,500 worth of wonderful prizes are waiting to be won and cash giveaways on a daily basis too. So the prize package with the brilliant trip isn’t the only thing on offer with Battle of the Bosses,

HOW LONG DO I NEED TO WIN?

It’s on Thursday the 27th July 2017 when this Battle of the Bosses competition started. So start playing today and collect the valuable prize draw tickets. Last entries will be taken on Sunday 13th August 2017. Every day cash giveaways will be given and 50 lucky winners will be pulled out in the final draw.

Enjoy your time with Battle of the Bosses gamblers and good luck!